How to Stop Fake National Grid Robocalls and Get Compensated

Scammers are once again targeting National Grid customers with elaborate robocall schemes, demanding instant payment for electricity bills. These robocalls are relying on scare tactics and threatening immediate service shut-off if payments are not made within a few hours. Considering that National Grid is an electricity and gas company that delivers electricity to approximately 3.3 million customers in Massachusetts, New York, and Rhode Island, it’s easy to see how many problems this scam can cause.

Customers of largest utility companies across the U.S. also reported robocalls contacting them, offering notable discounts on upcoming bills. The purpose of these robocalls is to push you to make a payment, either from prepaid or a gift card or by providing the scammers with your credit card number.

Robocall Scams to Pay Attention To

Not all scammers are counting on the fear factor to get to their targets—but some do choose to scare their victims into paying the bills because it is an effective way to get a significant amount of money fast. But others base their scams on a different approach. National Grid recorded complaints from their customers, regarding automated calls allegedly coming from employees of that company. The callers offered to lower their bills or postpone the due date.  Scammers sometimes choose to revolve their robocalling schemes around a personal moment—impersonating your known contacts, trusted companies, or state institutions by spoofing their phone numbers. Some scammers go the other way by tempting you with ridiculous prizes for a "symbolic" fee.

Some of the common robocall scams are:

“You Won a Cruise” Scam

If you do not recall entering any competition, be wary of the caller offering the prize. The automated call will inform you about this fantastic cruise you've won, and all you'll have to do is provide your credit card number to accept a free prize.

Charity based scams increase during any national or worldwide crisis. Scammers will use the devastation and lack of support caused by disasters to take money from people willing to help. They will use the misfortune of other people, guilt-tripping Americans into donating to their non-existent cause.

Robocalls will call trying to sell you lottery tickets, making assurances it's a sure win. Sometimes, they will even "let you win" a few times, to keep you interested. However, the winning sums won't get near to what you are going to spend ultimately.

In the Social Security fraud, scammers claim that your Social security number is about to be canceled or suspended.  They will ask for sensitive and private information in order to "stop" the process. Giving any sensitive info over the phone is dangerous, and apart from gaining your data, they can also record your voice, which can be used to inflict additional damages.

Why Are National Grid Robocalls so Dangerous?

National Grid consumers are being struck by the scammers using robocalling technology. Scammers, claiming to be from National Grid, demand payment on past due balances for electric bills and threaten customers that their service will immediately be shut-off for non-payment. Inducing fear is a popular tactic amongst robocallers, and it is particularly dangerous for multiple reasons.

How Do the Utility Scammers Trick People?

Each year Americans answer less than half of all incoming mobile calls.

This situation stems from the fact that the average number of unsolicited calls an American receives ads up to 14 each month, which is one unwanted call every other day.

Robocall can be any call coming from an unknown number with a voice recording on the other end. Companies and institutions turn to this method because it is a simple and efficient way of communicating announcements or sending reminders to a lot of customers. Scammers and telemarketers working illegally love how affordable and quick this technique is as well, but their motives are less noble, though equally annoying.

The technology behind these robocall operations is simple. Instead of paying a lot of people to spam-call people, scammers use voice-over-IP systems. VoIP (voice-over-IP) is a software that can make a considerable number of phone calls, targeting numbers from any phone database—which are usually bought from unlicensed traders. What makes it even worse is that these databases are resold continuously, so once your number ends up on one of them, you can expect scammers to contact you frequently.

Since people have stopped answering calls from unknown numbers, scammers have to be creative. That is where phone spoofing software comes in, which is a technology that is rapidly developing. With spoofing software, the caller can mimic the numbers in your contact list, as well as to change their Caller ID to any number they want. They can visit a website of any company, gather their contact info, and use it to call you. If you decide to check the company's website, the Caller ID of the scammer will match the official phone number of that company.

How Can Robocalls Be Legal?

Differentiating between legitimate automated calls coming from public institutions or organizations, and illegal robocalls can be an overwhelming process.

Not all robocalls are illegal. Companies often use robocalls as a means of mass outreach, and in most cases—if they are not trying to sell you anything—the call is entirely legal.

Here are some examples of both legal and illegal robocalls to help you see the difference.

Separating annoying from illegal comes down to drawing logical conclusions.

Are they asking for your credit card number? Do they promise a ridiculously large gain with what they claim to be a minimal investment? Is the caller demanding an answer and payment right now?

If the answer to any of these questions is "yes," the best option is to hang up and don't engage with the caller.

What Can You Do about National Grid Robocalls and Other Utility Scams?

National Grid published a scam awareness and preparedness FAQ regarding issues people have been having with utility robocalls. The page offers resources on how to identify scammers and what to do next if you have fallen victim to one, as well as a summary of current utility scams being reported to National Grid.

If you have been bothered by robocalls identifying themselves as coming from National Grid, the company advises you to ask the caller to provide the last five digits of your National Grid account number. If the caller doesn’t know that information, hang up immediately.

The Federal Trade Commission also offers you an option to report unwanted calls. The commission is familiar with robocalls and is working with other law enforcement agencies, initiating campaigns to combat robocalls and caller ID spoofing. You can use FTC Complaint Assistant to report any robocalls or phone scams.

The Federal Consumer Commission is offering tips on how to deal with spam calls, which can serve as an FCC robocall guide. Their website provides a robocall reporting service as well.

Reporting robocalls is essential and will, in most cases, add the spam numbers to national databases—which can help blacklist them in the future. But if you are continually being bothered, you might want to learn how to stop robocalls for good.

Rapid digital development might be useful for robocall scammers, with their ever-mutating phone spoofing software and tireless computers, but it can also be good for you. Your smartphone has some kind of built-in call robocall blocker, and if not, both AppStore and Play Store have numerous tools that can help you with the problem.

Dealing with robocalls on your landline can be a bit problematic, but it’s not hopeless.

Hacks to Destroy Robocalls on Landline

With a landline, you are dependent on your service provider. Still, the good news is that, thanks to the recent legislation changes—the TRACED Akt— phone companies are now providing call blocking services, usually free of charge.

Some of the biggest service providers offer tips and how-to guides as well.

Apps that Keep the Scammers out of Your Electricity Bill

With a cellphone, you have plenty of options—from built-in blockers to different apps, depending on the platform you use. The built-in blockers let you add a number to the spam list manually. The phone will then ignore all calls and texts from it.

Apps work on a broader spectrum, letting you choose how to respond to calls flagged as spam.

Some of the most popular robocall blocking apps that work both on iOS and Android are Robo Shield, Nomorobo, Truecaller, and Hiya.

Apps can have different characteristics and some features specific only to them, but  you will be able to stop spam calls with any of the ones presented. Most apps also allow you to create a whitelist of numbers to let through or blacklist of numbers to block or send straight to voicemail.

Some of the apps can also guide you through steps of adding your number to the national Do Not Call Registry, which could prevent legal robocalls from calling you.

Is the Do Not Call List Pointless in Preventing Robocalls? 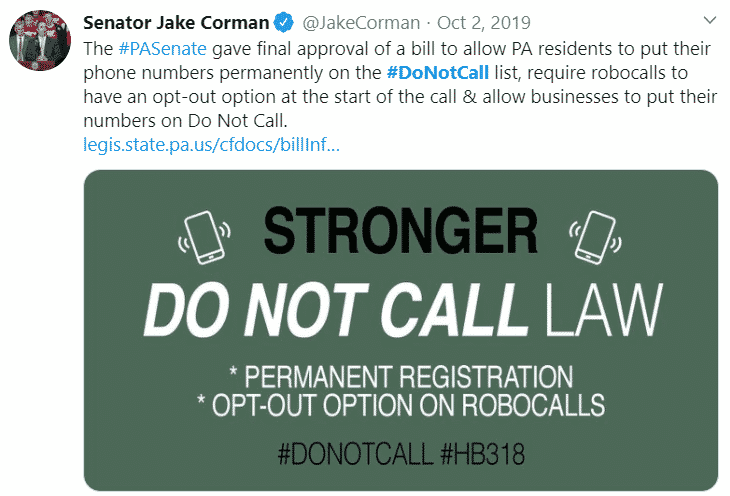 The Do Not Call list is a national registry of numbers whose owners have requested not to be disturbed by unsolicited phone calls.

The FTC launched the service in 2003, intending to reduce the number of unwanted phone calls Americans receive every year.

By adding your number to the national registry, it officially becomes forbidden for any company to call you without your consent. This action is permanent since there is no expiration date on the added entries. Any business that chooses to ignore this rule and call you, risks being taken to court over the matter.

Checking if a number is on the Do Not Call list sounds like a logical first step in preventing future spam calls, but the concept behind the service is far from perfect.

Some of the problems with the Do Not Call list are:

Get Revenge on National Grid Robocalls with DoNotPay!

DoNotPay is the first robot lawyer in the world that can help its users with all sorts of legal issues. Whether you need help with paying bills, lowering them, or are interested in a free virtual credit card, this app is a great choice.

DoNotPay can also help you get robocall revenge against National Grid scams.

Here’s how you can fight back against robocalls with DoNotPay:

If they refuse to pay, you can use the app to initiate a robocall lawsuit. Since this app is a virtual lawyer, it will guide you through the process of writing a formal demand letter, filling out legal paperwork, and filing your lawsuit.

DoNotPay is a way to hang up on robocalls for good, but the app is a powerful tool for assisting you in many other areas. Whether it’s canceling the membership to that gym you never go to or dealing with the Hulu subscription, this app has got you covered. You can get access to the site through a web browser.