Learn Everything About the Verbal Agreement

Standardized Legal Documents Learn Everything About the Verbal Agreement

When doing business, it’s important to set out the rules and duties of each party involved ensuring there will be no obstacles later on. The best way to do that is by creating legally binding contracts in written form, such as the non-compete agreement or the non-disclosure contract. You can count on DoNotPay to generate both of those for you and many other legal documents!

What happens if that contract has to be in spoken form—does it still stand in court? We provide you with all the answers about the verbal agreement and how to prove it in court!

What Is a Verbal Agreement?

A verbal agreement is a contract made between two parties doing business. It contains all of the elements that a written and legally binding contract would contain. The only difference is that the verbal agreement, as the name suggests, is conducted in spoken form.

Certain contracts have to be in written form, such as the contracts for:

If you’re conducting business that does not require a written contract, we’ll provide you with all the necessary info on how to go about having a verbal agreement instead.

If you include the following items in your verbal agreement, the chances of it being legally binding are much higher:

How To Prove a Verbal Contract?

Let’s say you made a verbal agreement with someone, and now you need to prove it in court. This can be quite challenging if there isn’t any proof of a conducted business apart from your word. Further issues that can arise are:

The best option to prevent difficulties in court is to have any type of document ready to support the verbal agreement. This doesn’t have to be a contract or a long document stating everything you covered in the verbal agreement. An email or a letter signed by both parties is often enough to convince the court.

The Advantages and Disadvantages of Having a Verbal Agreement

Like any other contract or legal document, the verbal agreement has its pros and cons. We will list some of the most common ones so that you can decide if it is the right choice for you.

Let DoNotPay Cut Your Work in Half by Generating Your Legal Docs for You!

Making legal documents and contracts often requires paying a legal advisor for help. This can prove quite difficult since creating agreements isn’t something we do on a day-to-day basis. That’s why DoNotPay has come up with a solution that will help you save time and money when drafting agreements and legal docs!

After completing these instructions, DoNotPay will create your document. All that is left to do is to sign or notarize it. Each party will probably have to sign it, but that depends on the document at hand. 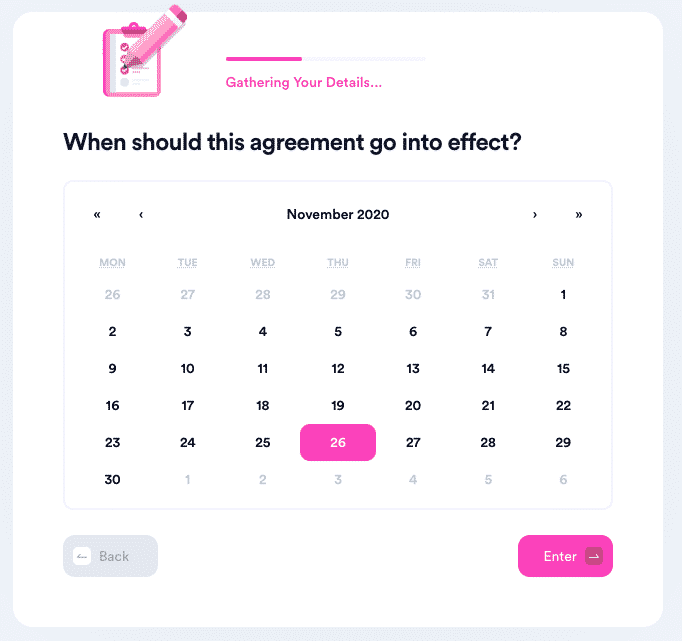 We offer you a list of the legal documents you can easily create using our app:

Can’t Afford a Lawyer? DoNotPay Will Jump In!

Did you know that you don’t have to waste money on expensive legal help just to get rid of some minor bureaucratic issues? DoNotPay is here to save you hundreds of dollars with ready-to-use solutions that require mere minutes.

Our AI-powered bots gather the most important information via short questionnaires, draft required legal documents, and provide you with online fax services. If you need specific public records to support your case, we’ll point you in the right direction.

With our virtual lawyer’s help, you will be able to:

With DoNotPay’s help, you’re bound to have more free time. If you’re considering a new streaming platform subscription, make use of its free trial without worrying about unwanted charges. Need to get rid of other subscriptions? Use DoNotPay to cancel them without contacting customer support centers.

Don’t worry about phone number identification at the signup. With our Burner Phone feature, spam text messages won’t be bothering you ever again!

Legal Templates.net Review: Is It Legit? Is It Safe to Use?
LawDepot vs LegalZoom: What's Different? Which is Better?
Is LawDepot's Free Prenup Legit? Here's All You Need to Know
LegalZoom vs LegalShield: What Are the Differences?
We Read All LegalZoom Reviews — Here's What To Know!
We Read All LegalNature Reviews, Here's What You Must Know
Is eForms Legit? Does It Store My Social Security Number?
FreeWill.com Reviews: Is It Legit or a Scam?
LegalZoom Will Reviews: Pricing, Features, & Best Alternatives
We Read Every eForm Review — Here's a Summary for You