How To Recognize and Fight Title VII Gender Discrimination

Title VII of the Civil Rights Act of 1964 prohibits workplace discrimination based on sex or gender.

This is a superficially fairly simple definition to understand, but it hides several gray areas that are only being clarified by recent employment discrimination cases.

If you think you may have experienced an example of workplace discrimination under Title VII, DoNotPay is here to help you combat it!

What Is Title VII?

Title VII is one of the 11 titles of the Civil Rights Act of 1964 and deals with employment discrimination law.

It prohibits discrimination in the workplace based on:

When it comes to gender or sex, Title VII does not specifically mention gender identity or sexual orientation as being included under the law. Several recent court cases have clarified that gender discrimination also covers members of the LGBTQ+ community.

What Kind of Gender Discrimination Does Title VII Prohibit?

Gender Discrimination comes in many forms, all of which are covered by Title VII.

The most common forms of gender discrimination at work are as follows:

Any complaint of gender discrimination in the workplace must be filed with the EEOC unless it can be resolved internally.

The EEOC maintains records of every gender discrimination case, and the statistics are as follows:

Gender discrimination is the third most common reason for a complaint to the EEOC in the U.S.

According to a University of Massachusetts study in 2016, though, the vast majority of sexual harassment cases go unreported—as many as 5 million cases take place each year in the U.S.

This means that workplace gender discrimination statistics may only represent the tip of the iceberg.

What Can You Do About Title VII Gender Discrimination?

If you are working in an environment where you feel discriminated against, it can affect your health, mental wellbeing, and job performance.

You should fight against gender discrimination, but it is on you to prove that your employer is guilty.

Your first course of action is to try to resolve the matter internally. To do this, you should:

You should report every occurrence of gender discrimination to your HR department—even if this involves daily meetings. The HR department should file your reports correctly and give you a copy of each deposition.

Make sure you know and understand your company’s anti-discrimination policy—this will allow you to identify the extent of the discrimination you are experiencing.

What if Internal Complaints Do Not Solve the Issue?

If your efforts to resolve the problem internally have no effect, your next step is to escalate the matter by lodging a complaint with the EEOC.

Once you have filed your charge of discrimination, the EEOC is obliged to investigate your case. If your assigned case officer finds there is “probable cause”—i.e., your employer has a case to answer—the investigation may lead to:

Filing your charge of discrimination can be a chore, though—the EEOC frequently insists on an in-person intake meeting to discuss your case before you can file. DoNotPay can solve this problem by helping you file your charge online in a matter of minutes!

DoNotPay Is Your Go-To Resource To File Your EEOC Charge

DoNotPay is the master at simplifying your life and making complex processes easy.

Filing your charge of discrimination with the EEOC is no exception—all it takes is a few clicks: 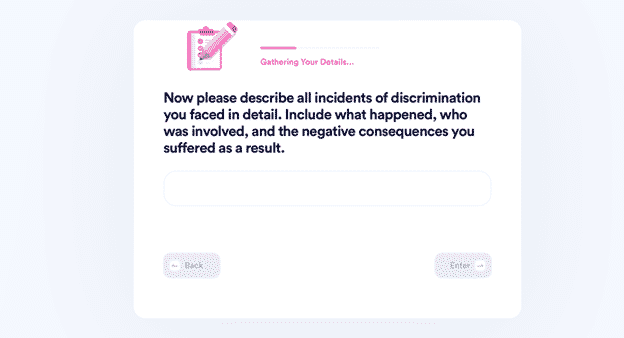 Done deal! DoNotPay and the EEOC will handle the rest! 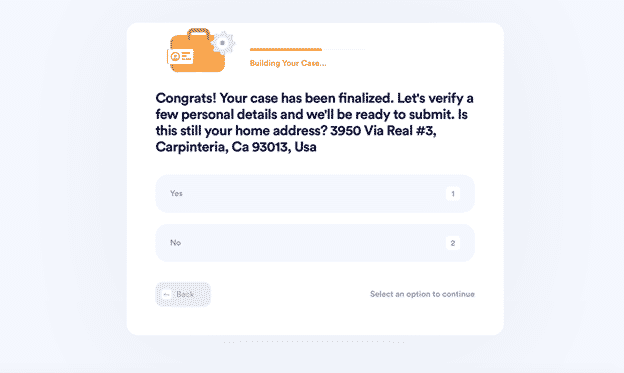