Sue Gun Manufacturers Without an Attorney

Despite a federal law passed in 2005 known as Protection of Lawful Commerce in Arms Act (PLCAA) that protects gun manufacturers from being implicated in wrongful death claims, there have been a handful of cases in the last several years that demonstrate unequivocally that gun manufacturers can and should be held legally responsible for damages.

Most notably, in 2019, the US supreme court ruled that a case brought against industry giant Remington Arms Co. by the families of victims of the mass shooting at Sandy Hook Elementary School would be allowed to proceed. In this case, the plaintiff's claim that Remington was partially responsible for the damages due to irresponsible marketing practices that broke state and federal laws.

Victims of gun violence can and should be compensated for their losses. But navigating the complicated legal system alone can take an emotional, physical, and financial toll. Luckily DoNotPay can help sue gun manufacturers in small claims courts across the country.

In addition to the historic decision in the Sandy Hook case, a handful of additional cases have been filed and allowed to proceed. Gun manufacturers can be sued for a variety of reasons including (but not limited to), negligence, illegal purchase of a firearm, and damages from design defects in guns.

Sue Gun Manufacturers by Yourself

It is absolutely critical for gun manufacturers to be held accountable. Civil liability plays a critical role in injury prevention across all industries. Gun manufacturers should not be an exception.

Although it is always best to consult a professional, you can sue a gun manufacturer by yourself. Here is a general overview of the process required to bring your case to small claims court:

Dangers/Issues With Suing Gun Manufacturers by Yourself

The PLCAA provides unprecedented protection to gun manufacturers against civil liability. Additionally, it is a multi-billion dollar industry with fierce advocates (including National Rifle Association) that will use every resource available to squash civil cases.

DoNotPay is here to help you sue gun manufacturers by yourself. There's no reason to fight alone.

How to Sue Gun Manufacturers With DoNotPay

Utilizing our digital service gives you a much stronger chance of succeeding than filing a lawsuit against gun manufacturers by yourself. DoNotPay's robot lawyer blends the convenience of submitting paperwork whenever/wherever with the reassurance of knowing the information you submit will be tailored to your needs.

That's it! DoNotPay will then generate a demand letter or court filing forms for you. We'll even mail a copy of your demand letter to the individual or business you are suing! 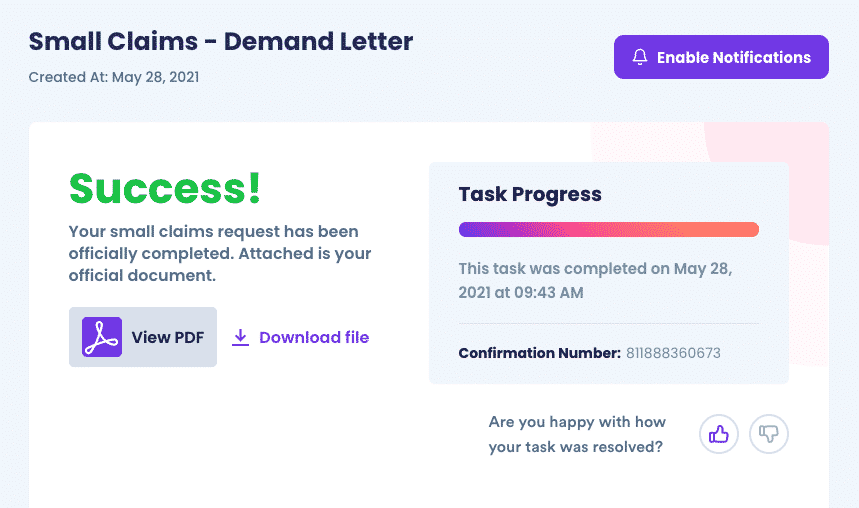 Use DoNotPay for Every Legal Need

Gun manufacturers are not the only bullies that you can take on with DoNotPay. Check out our resources on how to sue large companies and get the justice (and the payout) you deserve.