The Truth About the Sex Offenders Recidivism Rate

Sex offenders, once convicted, face a penance far longer than any custodial sentence.

Even if their crime is relatively minor, sex offenders have to place themselves on a registry that puts their name and whereabouts in the public domain. They face years of having to live down the stigma of their crime.

DoNotPay helps you understand the sex offenders’ recidivism rate and how you can best protect yourself and your loved ones from the threat of a re-offending criminal.

What Are the Most Common Sex Crimes?

Sex offenses are categorized according to their severity, as follows:

The prevalence of different sex offenses varies by state. The highest percentage of rapists—tier III offenders—compared to total registered sex offenders is in Washington at 49%, compared to the lowest percentage (6%) in Oregon. The full ranking is as follows:

How Many Sex Offenders Re-Offend?

There are many studies that have tried to measure the recidivism rate for sex offenders.

Measuring recidivism is made more difficult by:

Sex offenses are some of the most underreported types of crime in the U.S.

This means that many convicted sex offenders may re-offend, but their crime will not appear in any statistics. The recorded recidivism rates of sex offenders are probably only the tip of the iceberg.

Many studies only track sex offenders for three years after their release into society.

The reported recidivism rate in the first three years after release is low, but studies that track sex offenders for longer show that the rate goes up after longer periods.

The reason for this may be that sex offender registration starts to become less reliable after longer times—offenders stop updating their information, move states, or dive under the radar to avoid the social stigma involved with their registration.

How Does Registration Work?

Convicted sex offenders in most states have to place themselves on their state’s registry for the following periods:

The registry contains basic information about each offender, such as:

Many states collect more detailed information, and offenders are required to update their details every year or every quarter for tier III convictions.

Being on a state sex offender registry imposes many restrictions on convicted criminals, including:

Under the terms of the 1996 Megan’s Law, anybody can access their state registry to check up on the whereabouts of sex offenders.

Many offenders drop off the registries after several years and become unregistered, though. This fact also links to the danger that sex criminals are more likely to re-offend after longer periods.

Bearing this in mind, the more information you have about sex offenders in your area, the more you can protect yourself and your loved ones from the danger they represent. This is where DoNotPay can help you search for sex offenders!

DoNotPay Helps Keep You and Your Family Safe From Sex Offenders! 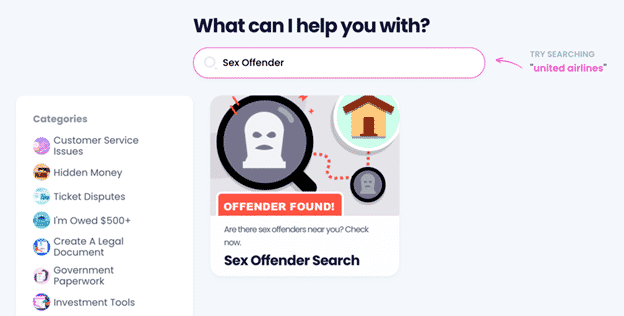 DoNotPay is here to help you use your state sex offender registry to avoid danger!

With our Sex Offender Search product, you can search for registered offenders in your area or look for the whereabouts of a specific person. If you choose, we can even keep you updated on any changes by sending you a weekly report!

We will send you your report in a flash and keep you posted on updates every week if you choose!

Why Waste Money on Lawyers When You Have DoNotPay?

Although certain tasks require you to get a lawyer’s assistance, you don’t have to spend hundreds of dollars for their service. With DoNotPay, you can avoid figuring out the legal jargon and have peace of mind dealing with bureaucratic tasks the easy way.

Communication Is the Key

The best way to resolve issues is through clear communication, but companies don’t always make it easy to do so. That’s why DoNotPay came up with various features that help make communicating and solving problems a piece of cake. Sign up for our app and forget about waiting in lines for hours to speak to a customer service rep!

Here’s what you can do with our app: